Invasive Species:- Those who are nature to a sperific area or lacation.

They are found near water surface and they used to live near water avoid forest areas.

Body colour:- They are greenish or aliver green in colour with dark spots vertebral line.

are also called as thumb pad found only in male and helps in grasping the female frog during capulation.

Vocal sac:- is a flexible membrane of skin which is wed in making the advertisement call during breeding season male is ready to produce.

Jaws are bounded with immovable lips.

Buccal cavity contain jaws in which upper jaws is fixed &contain set of teeth which are called “vomeric” teeth .There teeth are involve in digestive process &used only to prevent the excape of prey lower jaw is movable .

It is most important part of alimentary canal where the digestion of ingested food take place through digestive glands.

Stomach is divided into 2 regions

Stomach lead to a highly coiled, elongated tube like structure called intestine, which are divided into

Rectum leads to a small sac like structure which receive opening from the anus & urino-genital operture.

Small intestine through the hepato-pancreatic duet. 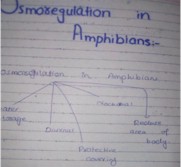 Water & mineral ions balance in the body. Amphibians must have need to remove or store water & conserve mineral ions.

The skin & wall of urinary bladder are responsible for transportation of internal ions.

The terrestrial amphibians used to avoid the dry land & if they are diurnal . They find out best humid areas or moist land where they tap their body on earth’s surface & maintain water balance.

Some amphibians are nocturnal in nature & came out only at night .They already live in humid area to reduce the chances of water loss.

Amphibians which lives in burrows & in group form used this mechanism. They fold their body & come close to each other in this way a small body area is exposed to the environment/atmosphere.

The amphibians have the ability to store water in their lymph sac & urinary bladder.

35% water is stored by amphibians in respond to their body weight.

Skin of amphibians is richly supplied with capillaries so they flattened the skin on moist surface & absorb water to rehydrate themselves.

When the gaseous exchange occur through skin the respiration is cutaneous .The skin contain blood capillaries & involve in absorbing O2 from the atmosphere & removing the CO2 from body.

(1).Advertisement call by male for reproducing .

Found all over the world b/c they are cosmopolitan in nature.

The body of the mammals is covered with skin possesses hairs. The hairs are made up of keratin protein.

Also called as milk gland that are functional in females , produce milk to nourish their bodies.

Also called as the fragment gland .In some mammals skin contain scent gland which produce specific fragment or scent that is used for sexual behavior .Also wed commercially.

Also called as the oil gland . It is present beneath the epidermic & lubricate skin & hairs to make them water proof.

Complete heat & circulatory system is complex having no mixing of O2 &CO2 blood sinus vinosus is absent (Different from fishes).

Kangaroo are example gin which the egg contain only yolk sac so the babies draw nourishment from yolk sac .When yolk sac is utilize they born but are

O.anatinus are present the bank of rivers. Size----45 cm

Bead like small rounded, eye are present on head.

Spur is a structure that is present in hind limbs of duck bill platypus . In males the spur contain crural gland & the function of crural gland is to produce venome which used for

They originate & found in Australia .They are extinct in Pakistan. Macropus rufus is largest surviving kangaroo.

They are herbivores & feed on variety of grasses b/c of grazing they have specialized type of teeth.

Both limbs have digits & claws.

External ear is present on viviparous are absent

Kangaroo are oviviparous mean their feotus develop in uterus with only yolk sac placenta when the yolk sac is utilized , the embryo get delivered but is not completely developed & is immature with only 2.5 cm in length -50 the baby retain in mother baby.

They may live in marsupian for 3-4 month.

They are cosmopolition, found every where in world but their original home was Europe & Africa from where they spread or carried by man from place to place.

They are gregarious in nature i.e. they live in groups even several families consisting of hundreds of rabbit which live together.

Morphology:- Body is divided into 4 parts.

Shape:- Their body is pointed auteriorly and broader posteriorly.

Colour:- They are found in white colour or black colour, Sometimes white with brown or black patches.

Mouth:- Mouth is present on terminal of snout which is bounded by pair of moveable upper and lower lips.

Lips:- The upper lip is divided in middle and extend upwards to the nostrils.

Eyes:- Pair of rounded eyes are present on either side of the head.

Ears:- External ears are present which are large, elongated and trumped shape.

Vibrissae:- On either side of nostrils, near upper lip, present, which are sensory in function.

Neck:- Neck is part of body present between the head and trunk and it is present to provide free movement of head in all direction.

Abdomen:- Abdomen is broader body part which is enclosed in abdominal cavity.

Perineal gland secreate a fluid which produce a specific and strong odour/smell in rabbit.

With Ankle (Tarcus) & soul (metatarsul) & four digits are present which are clawed.

Bushy small tail present at the end of trunk which is white form posterior side , Tail is used for defense during any tail for warning alarm to their companies.

Amphibians are vertebrae tetropodes . Amphibia include frogs, salamansars, & caecilians. The term amphibians loosely translate from the Greek as “ duel life” which is a reference to the metemorphpsis that many frogs & salamandars undergo & their mixture of aquatic & terrestrial environments in their life cycle.

Amphibians evolved during the Devonsion period & were the earliest terrestrial tetropodes.

Order caudata include that amphibians which posses tail. Salamanders are the amphibians of order caudate which is also known as urodela. This taxon include group of rough skinned species of family salamandridae.

Aneides vagrans are mostly found in Canada & U.S Most of the species are native to western hemi share from british Columbia to Brazil & few of them found in south korea

The natural habitat of Aneides vagrans is temprate/ moderate. Forest it is threatened by habitat loss it can mostly live in move on land during day time of high humidity.

During day time, they hide themselves under tress while at night they feed at small invertebrates like ants, mites, beetles , snails_

Wandering salamander is similar in appearance to the clouded salamander ( Aneides ferrus) & was consider to be the same species but they are separted recently due to same genetic evidence.

A tail in animal that has adopted to be able to grasp & hold objects.