What Are Capital Markets?

Capital markets are venues where savings and investments are channeled between the suppliers who have capital and those who are in need of capital. The entities that have capital include retail and institutional investors while those who seek capital are businesses, governments, and people.

Capital markets seek to improve transactional efficiencies. These markets bring those who hold capital and those seeking capital together and provide a place where entities can exchange securities.

The term capital market broadly defines the place where various entities trade different financial instruments. These venues may include the stock market, the bond market, and the currency and foreign exchange markets. Most markets are concentrated in major financial centers including New York, London, Singapore, and Hong Kong.

The Pakistan Stock Exchange is the example of capital market

Financial companies involved in private rather than public markets are part of the capital market. They include investment banks, private equity.

What Is a Primary vs. Secondary Market?

In the capital markets, corporations behave as operating businesses that require capital to grow and run their operations. These corporations can vary in industry, size, and geographical location. Careers at corporations that relate to the markets include corporate development, investor relations, and financial planning and analysis (FP&A).

Institutions consist of fund managers, institutional investors, and retail investors. These investment managers provide capital to corporations that need the money to grow and operate their businesses. In return for their capital, corporations issue debt or equity to the institutions in the forms of bond and shares, respectively. The exchange of capital and debt or equity completes the cycle of the two key players in the capital markets.

Examples of top “Buy Side” Firms: 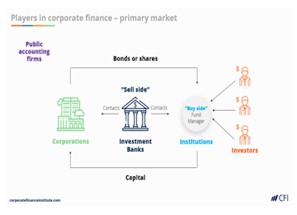 Key Players in the Secondary Market

In the secondary market, fund managers or any investors who wish to purchase securities or debts will have to locate a seller. Transactions are facilitated through a central marketplace, including a stock exchange or Over The Counter (OTC).

While investment banks facilitate the issuance of bonds and shares in the primary market, they expedite the sales and trading of issued debts and equities between buyers and sellers in the secondary market.

Investment banks provide equity research coverage on each stock’s upside potential, downside risk, and rationale to help buyers and sellers make a judgment. Moreover, investment banks sell and trade securities on behalf of the clients to maximize their profits. 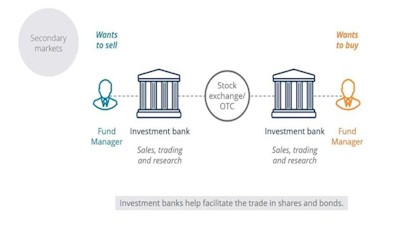 A bond is a debt instrument that provides a periodic stream of interest payments to investors while repaying the principal sum on a specified maturity date. A bond’s terms and conditions are contained in a legal contract between the buyer and the seller, known as the indenture.

Each bond can be characterized by several factors. These include:

The periodic interest payments promised to bond holders are computed as a fixed percentage of the bond’s face value; this percentage is known as the coupon rate.

A bonds maturity is the length of time until the principal is scheduled to be repaid. In the U.S., a bond’s maturity usually does not exceed 30 years. Occasionally a bond is issued with a much longer maturity; for example, the Walt Disney Company issued a 100-year bond in 1993. There have also been a few instances of bonds with an infinite maturity; these bonds are known as consols. With a consol, interest is paid forever, but the principal is never repaid.

Many bonds contain a provision that enables the issuer to buy the bond back from the bondholder at a pre-specified price prior to maturity. This price is known as the call price. A bond containing a call provision is said to be callable. This provision enables issuers to reduce their interest costs if rates fall after a bond is issued, since existing bonds can then be replaced with lower yielding bonds. Since a call provision is disadvantageous to the bond holder, the bond will offer a higher yield than an otherwise identical bond with no call provision.

A call provision is known as an embedded option, since it can’t be bought or sold separately from the bond.

Some bonds contain a provision that enables the buyer to sell the bond back to the issuer at a pre-specified price prior to maturity. This price is known as the put price. A bond containing such a provision is said to be putable. This provision enables bond holders to benefit from rising interest rates since the bond can be sold and the proceeds reinvested at a higher yield than the original bond. Since a put provision is advantageous to the bond holder, the bond will offer a lower yield than an otherwise identical bond with no put provision.

Some bonds are issued with a provision that requires the issuer to repurchase a fixed percentage of the outstanding bonds each year, regardless of the level of interest rates. A sinking fund reduces the possibility of default; default occurs when a bond issuer is unable to make promised payments in a timely manner. Since a sinking fund reduces credit risk to bond holders, these bonds can be offered with a lower yield than an otherwise identical bond with no sinking fund.

The word Sukuk is an Arabic word which means certificate. These are certificates which are offered by corporations and governments which follow Islamic principles.

Bonds may or not be backed by a real asset. However, Sukuk always has to be backed by a real asset. This is because the Sukuk contract itself provides transfer of ownership of the asset for a short period from the issuer to the buyer. Sukuk is essentially a repurchase contract wherein the seller of an asset sells the asset at a certain price and then agrees to buy it later at a higher price. Since the loan does not have a fixed interest rate, Sukuk is allowed as per Islamic laws.

The Underlying Assets are Sharia Compliant

The Pricing of Sukuk

A loan is not priced on the basis of collateral. The lender does not intend to liquidate the collateral. This is the reason that loans are priced based on the creditworthiness of the borrower. If the borrower has an AAA+ rating, a lower interest will have to be paid on the loan. On the other hand, if the borrower is likely to default, the interest rate demanded is very high.

This is not the case with Sukuk. The Sukuk is priced depending upon the value of the underlying asset. The creditworthiness of the borrower has very little impact on the pricing of the Sukuk. Also if any capital appreciation happens in the asset during the period that the buyer is holding a Sukuk, such benefit belongs to the buyer. For instance, if Saudi Arabia issues Sukuk backed by its oil and the price of oil doubles, then the profit will belong to the holders of the Sukuk since they are the owners of the asset for that period.

On the other hand, if Russia issues bonds backed by its oil and the price of the oil appreciates significantly, the investors are no better off. This is because they have provided a loan and bore no part of the risks. Hence, they are not entitled to receive appreciation.

Similarities Between Bonds and Sukuk

Common stock is an equity instrument that represents a small portion of company ownership. The stockholders enjoy dividends once or twice a year. Not like preferred stocks or bonds, the common stock declares a high dividend. As this type of investment has a high dividend yield, it is also a risky investment. The owner can lose the value of the stocks. Also, if there is any downtime, the common stockholders may not enjoy any dividend, unlike preference shares.

One of the most popular features of common stock is that anyone can buy and own it, hold it, and sell it when in profit. Also, if anyone wants, s/he can hold it forever and enjoy the yearly dividend for a lifetime.

The Value of Common Stocks

Right to have Capital Gain

What are Preferred Shares? 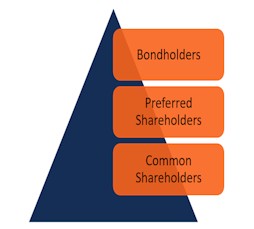 Preferred stock is a very flexible type of security. They can be:

Convertible preferred stock: The shares can be converted to a predetermined number of common shares.

Exchangeable preferred stock: The shares can be exchanged for some other type of security.

Perpetual preferred stock: There is no fixed date on which the shareholders will receive back the invested capital.