Select The Notes of Economics for BBA Notes Type

Nots of Economics for BBA

Topic In This Chapter

In f 776, in his book "An inquiry into the nature and causes

of the wealth of nations"

1-Definition of wealth, and

Around the industrial revolution, merchants were the most powerful class in Western Europe, and wealth for them meant money only.

Sin money at that time was in the shape of gold, merchants declared gold as the only wealth.

Activities which did not result in production of material goods production were unproductive.

Human being are born selfish

so left to themselves , each individual would maximize his self intrest (wealth / economic)

When all the  adults of the nation maximize their self interest the wealth of nation grow the faster.

Production and growth of wealth as the subject matter of economics.

Wealth is preferred over human.

He considered how individual prices are set and prices of land, labor, and capital are determined

considered economics as a dismal OF selfish science.

defined wealth in a very narrow and restricted sense Which considers only material and tangible goods while ignored the services of a doctor and teacher etc.

Have given emphases only to wealth and reduced man to secondary pace in the study of economics.

Adam Smith emphasis only to earn the wealth.

Science of Welfare by Alfred Marshal

Adam Smith’s prophesy that  self-interest would be beneficial to all did not materialize after the industrial revolution.

The revolution divided the society into haves and have - not -including unemployed.

“a study of mankind  ordinary business of life its examines that part of individual and social action which is most closely with the attainment and with the use of material requisites of wellbeing . Thus it is one side a study of wealth; and on the order and more important side, a part of a study of man”.

In t 93 1, in his book "nature and significance of economic science" as “economics is a science which studies behavior as a relationship between ends and scarce means which have alternative uses”

"ENDS"……. refers to human wants………which are unlimited and hence {main has to make a choice of

Economic is also called a science of CHOECF.

Resources to satisfy unlimited wants are scarce/limited except few.

Resources have alternative use.

Had the resources been unlimited, there would have no economic problem.

Economics is science or an art?

Economics is both science and art.

Eco is science because economists use scientific methods in their analysis.

Establishes relationship between cause and effect.

Scarcity of resources compels people to make a choice about goods and services and to make a good choice is an ART.

The knowledge which is gained by experiment or observation.

A want is desire to get goods and services, which provide utility.

Wants are the roots cause of all human activity. 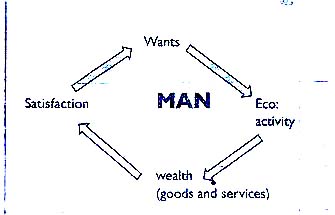 Human wants are of two types: